In the last decade, the relevance of Good Financial Governance for development was highlighted in a number of international debates and declarations. Africa has influenced these discussions by sharing its positions on public financial management (PFM), domestic resource mobilisation and oversight.

A key element of this effort is the Declaration on Good Public Financial Governance in Africa. In 2011, GIZ’s Good Financial Governance (GFG) in Africa programme assisted its African partner organisations ‒ the African Organisation of Supreme Audit Institutions (AFROSAI), the African Tax Administration Forum (ATAF) and the Collaborative Africa Budget Reform Initiative (CABRI) in initiating the declaration. The purpose of the declaration was to reach a common understanding of financial governance challenges and priorities for consideration by African ministries of finance. As such, it remains a core reference document for the programme, as well as the African network organisations.

African networks in the global narrative

Regional public finance networks increasingly strengthen the representation of Africa in international processes: CABRI, for example, played a prominent role during the fourth High-level Forum on Aid Effectiveness in Busan, drafting the African position on aid transparency and providing input to the Busan Outcome. ATAF, supported by GIZ, successfully hosted the Consultative Conference on New Rules of the Global Tax Agenda in 2014. The conference brought together heads of African tax administrations and ministries of finance to deliberate on international tax issues, as well as the G20/Organisation for Economic Cooperation and Development (OECD)-driven project on base erosion and profit shifting (BEPS) and its related action plan. For the first time, a deliberate attempt was made to find a unified African response to these international challenges.

The above results are in many ways contingent on the identification of joint initiatives and positive working relationships with key stakeholders, thereby ensuring acceptance of African positions and best practice in the area of GFG. 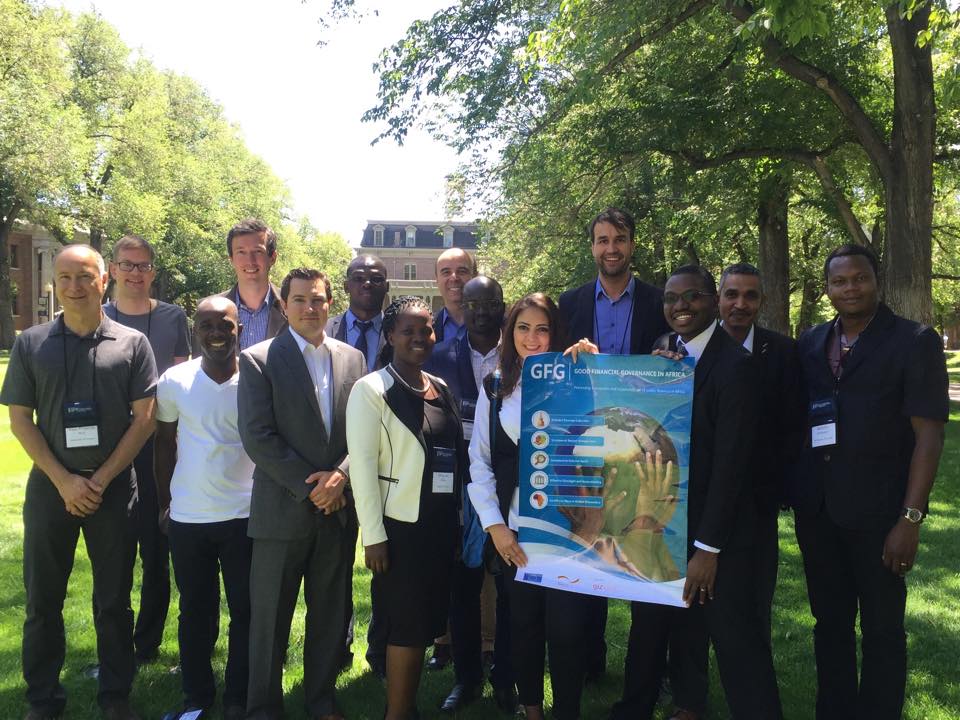 Senior academics and the junior participants of the GIZ master class at the University of Reno, close to Lake Tahoe. (Photo © IIPF)

GIZ and its partner networks identified the fight against Illicit Financial Flows (IFFs) as an area in which an African Voice needs to be strengthened. Over the last 12 months, a number of IFFs-related activities took place. The IFFs workshop in Pretoria in July 2016, in which all networks participated, aimed at discussing strategies and activities in the fight against IFFs to better coordinate and join forces. Discussions on activities ranged from expanding the technical work on taxation into the parliamentary realm and focusing more on the coordinative role of ministries of finance, to starting a joint audit on corruption. The insights and recommendations generated at the workshop will drive the joint activities of partner networks and GIZ.

Furthermore, the outcomes of the workshop emphasised the necessity to better translate political awareness of IFFs into effective action by the governments of each country involved. Ministries of finance play a key role in ensuring policy coherence and a coordinated approach, and parliaments are essential in generating political will, which is a precondition for any progress. This workshop was a milestone in the process of organising a pan-African conference on IFFs and good financial governance in 2017.

In representing a common voice of all African Supreme Audit Institutions (SAIs), the position papers identify the crucial need for increasing the involvement of SAIs considerably if the Sustainable Development Goals (SDGs) are to be achieved. The papers also express AFROSAI’s view that professionalisation is particularly important for the African continent, since many SAIs face challenges on the individual, organisational and systemic level.

The deliberations at the congress and the resolutions taken will guide AFROSAI’s future work, supported by the GFG in Africa programme, in assisting its member SAIs in facing these challenges.

ATAF continues to represent the voice of African tax administrations in global debates: the most recent of these debates are the Global Forum on Transparency and Exchange of Information for Tax Purposes, the OECD’s Committee on Fiscal Affairs and the Subregional Workshop on Curbing IFFs of the United Nations Economic Commission for Africa (UNECA).

During the Third International Conference on Financing for Development in Addis Ababa in 2015, ATAF hosted a well-received side event to discuss ways of funding the African Agenda 2063.

CABRI: Underlining the importance of health financing in Africa

CABRI contributes to global discussions on health financing by presenting the priority needs of African governments in an international context. In October 2016, CABRI participated in a strategy meeting at the World Health Organisation (WHO) in Geneva.

The German government invited CABRI to participate in an expert talk entitled The missing link? How good financial governance helps strengthen health systems. During the April 2016 discussion held in Bonn, CABRI presented its key findings from its work on value for money in the health sector and the challenges in health financing, across Africa.

African researchers lack exposure to international discussions, and consequently their involvement is limited. As part of the GIZ programme’s focus on capacity building, research master classes were held in 2015 and 2016 in collaboration with the International Institute for Public Finance (IIPF). This institute maintains international standards developed by researchers in public finance. In 2016, the master class was presented back to back with the IIPF’s annual congress that took place at Lake Tahoe, Nevada, USA, in August. Thirteen junior researchers from 10 African countries participated in the master class. They discussed their research on public finance with distinguished senior academics from the USA, Canada and Germany, and used the opportunity to network and exchange views with world-class public finance researchers.

On the continental level, GIZ liaises with four African Regional Technical Assistance Centres (AFRITACs) and participates in their steering committee meetings. The AFRITACs are part of the International Monetary Fund’s capacity-building initiative in Africa. They support recipient countries in their efforts to strengthen financial governance and develop effective and legitimate institutions by providing technical assistance and networking measures such as regional workshops. The participation by GIZ in the steering committees aims at ensuring complementary support in public financial management reforms on country and regional level.

GIZ brought together representatives from partner networks and other donors during a workshop where they learnt more about each other’s approaches and activities in the area of IFFs. (Photo © GIZ)