The term “Illicit Financial Flows” (IFFs) was first coined in the 1990s and was initially associated with capital flight, a phenomenon typically associated with outflows of money from a country. It now generally refers to cross-border movement of capital associated with illegal activities, or more explicitly, money that is illegally earned, transferred or used. Although the expression “Illicit Financial Flows” is increasingly used, no agreement could thus far be reached on its precise definition. There is an ongoing global discussion on whether and what commercial activities – which lead to tax avoidance – should be regarded as part of IFFs, considering that many business practices to lower tax liabilities are legal (at least) according to the letter of the law.

However, there is consensus that IFFs cover three areas that overlap in practice:

The impact of IFFs

Although these criminal activities are damaging to countries worldwide, Africa is especially vulnerable because of the fact that most countries have a rapidly growing national debt and scarce financial resources. The leakage of wealth from poor countries through tax evasion, money laundering, trade mispricing and other misdeeds poses a huge challenge to political security, and economic and social development on the continent. This is particularly the case in fragile and conflict-affected states as well as in resource-rich countries – illegal activities are more concentrated in the extractive and mining industries than others. In addition, weak governance is regarded as an enabler and a consequence of IFFs. 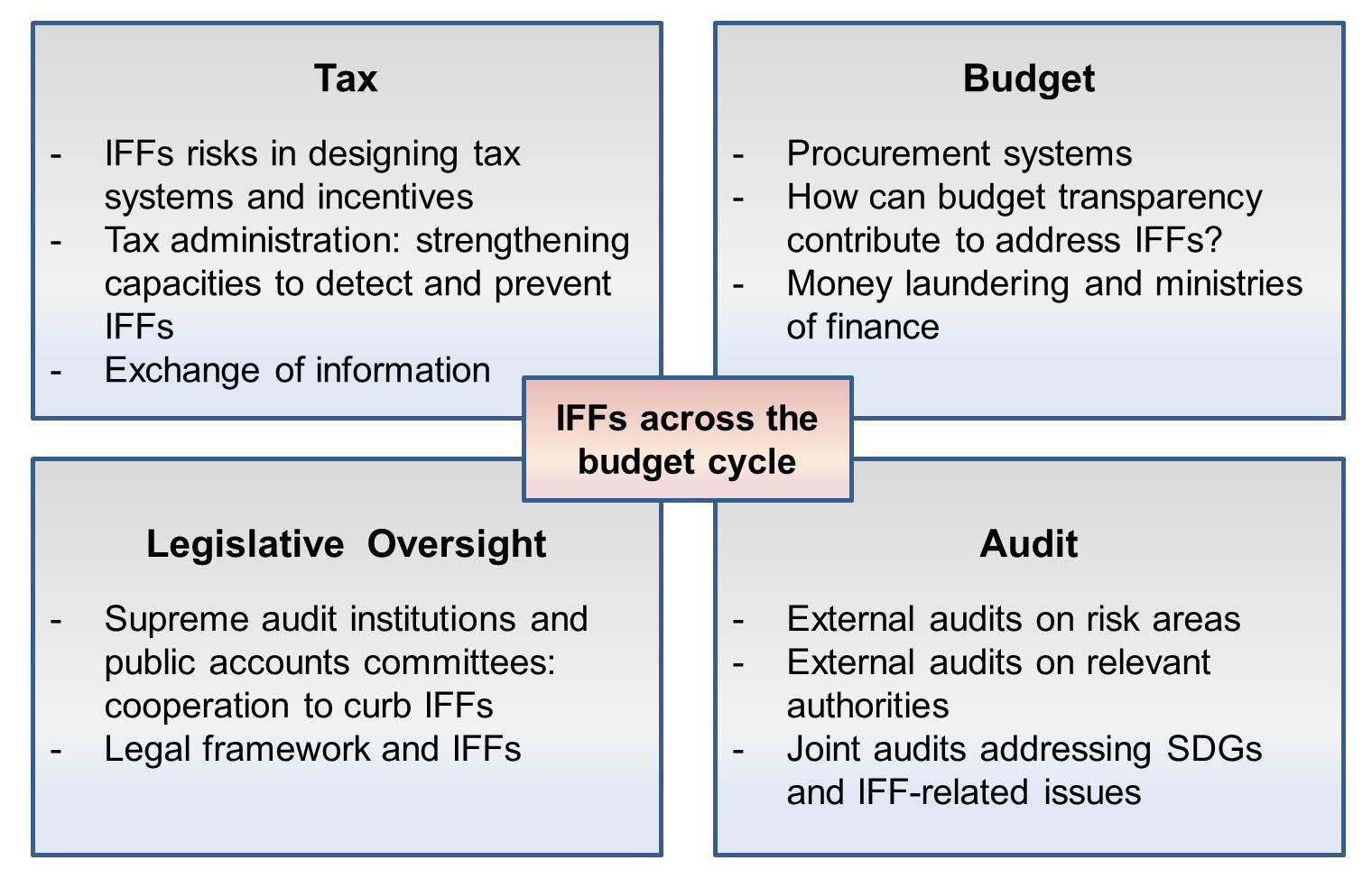 The GFG in Africa programme supports its partner networks in the fight against IFFs throughout the Public Financial Management Cycle. (Graph © GIZ)

The battle against IFFs: Role of Good Financial Governance

The Good Financial Governance (GFG) in Africa programme supports a pan-African dialogue on IFFs on behalf of the German Federal Ministry for Economic Cooperation and Development (BMZ) and the European Union. With the increasing integration of international markets and economic globalisation, the GFG approach emphasises the importance of strengthening governance systems to fight IFFs, advocating the role of inter-agency cooperation, more robust legal frameworks and improved technical expertise in national administrations.

Every country’s context and the underlying activities that result in IFFs will determine the measures to be implemented. In some cases, actions will involve preventing criminal activities, and in others, they may involve identifying and sanctioning serious and substantial illegal tax evasion. Where corruption is a key factor, a country’s governance environment always has to be taken into account.

The GFG in Africa programme supports four regional networks in their efforts to reduce IFFs:

Together with its partner networks, the GFG in Africa programme is launching pilot measures in selected member countries, as well as on a regional level. These activities are designed to generate empirical knowledge, and to support individual and institutional capacity development and peer learning. Ultimately, they should assist in strengthening governance systems that prevent IFFs. The aim is to share and connect the experiences of the different countries, so that they can feed into national, regional and international discussions by the partner networks and the German development cooperation actors.

The objectives are as follows: 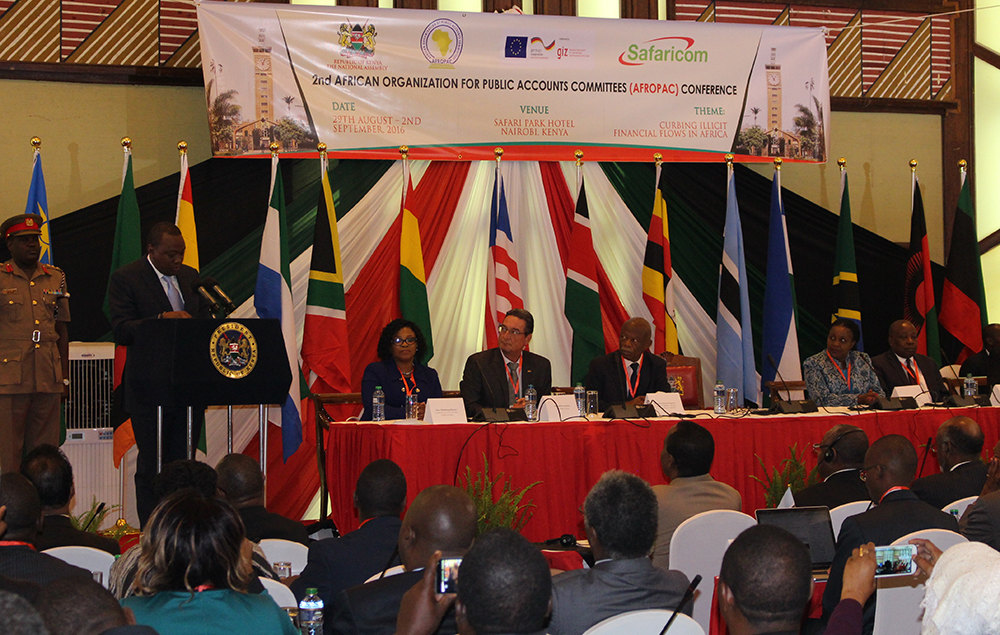 Kenyan President Uhuru Kenyatta opened the AFROPAC conference about the role of African legislators in the fight against IFFs. (Photo © GIZ)

Over the last 12 months, the GFG in Africa programme has achieved the following: 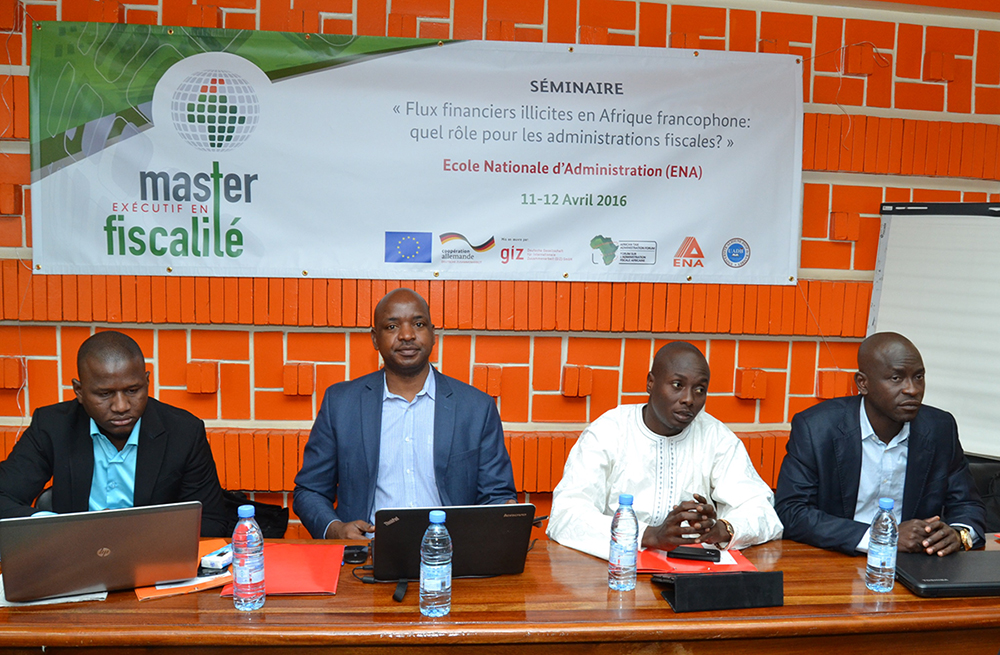 During a workshop in Senegal in April 2016, participants of the Francophone Executive Master’s in Taxation programme discussed the role that African tax administrations could play to address IFFs. (Photo © GIZ)