With the publication of the Report of the High Level Panel on Illicit Financial Flows from Africa it has become clear that Illicit Financial Flows (IFFs) are an acute threat to Africa’s development. The continent is estimated to lose more than US $50 billion per annum in IFFs, which are defined as money illegally earned, transferred or used. This is approximately double the official development assistance (ODA) that Africa receives. Corruption, such as bribes to government officials and embezzlement, is a one of the sources of IFFs and fuels all other IFFs stemming from commercial activities (tax evasion or trade mispricing) and criminal activities (money laundering of proceeds).

The Good Financial Governance (GFG) in Africa programme supports its partner networks with technical and financial assistance in a number of IFFs-related activities:

– The African Tax Administration Forum (ATAF), in the area of tax policy and administration

– The African Organisation for Supreme Audit Institutions (AFROSAI), in the area of external financial control and auditing

– The Collaborative Africa Budget Reform Initiative (CABRI), in the area of budget planning and implementation

– The African Organisation for Public Accounts Committees (AFROPAC), in the area of legislative oversight

A coordinated approach in curbing IFFs among the networks reinforces a unified African position on the subject, which can strengthen Africa’s influence in international discussions. With the increasing integration of international markets and economic globalisation, the GFG approach emphasises the importance of strengthening governance systems to fight IFFs, advocating the role of inter-agency cooperation, more robust legal frameworks and improved technical expertise in national administrations.

The heads of 13 African SAIs signed a memorandum of understanding to seal their commitment to the audit (Photo © OAG Kenya 2017).

GIZ supported the AFROPAC conference on IFFs and the second General Meeting that took place in August 2016 in Kenya. The event attracted more than 150 delegates, including over 40 members of parliament from 12 countries. During the IFFs conference, legislators discussed strategies in combatting IFFs within African countries. Kenya’s President Uhuru Kenyatta opened the conference with a keynote address on the matter. Read the full article here.

One day prior to former South African Finance Minister Pravin Ghordan’s 2017 Budget Speech before the South African Parliament, GIZ and the European Union hosted a high-level panel discussion about the role of legislators in combatting IFFs . The event took place in Cape Town on 21 February. Panellists included Prof Annet Oguttu who was part of the Davis Tax Commission as well as Adv Mojanku Gumbi who served as the special advisor to former President Thabo Mbeki. Hon Themba Godi, Chairperson of the Standing Committee on Public Accounts in South Africa, chaired the panel. The three hour discussion attracted a wide audience, consisting of among others, members of parliament, diplomats, NGO representatives and postgraduate students. A report on the discussion is available here. 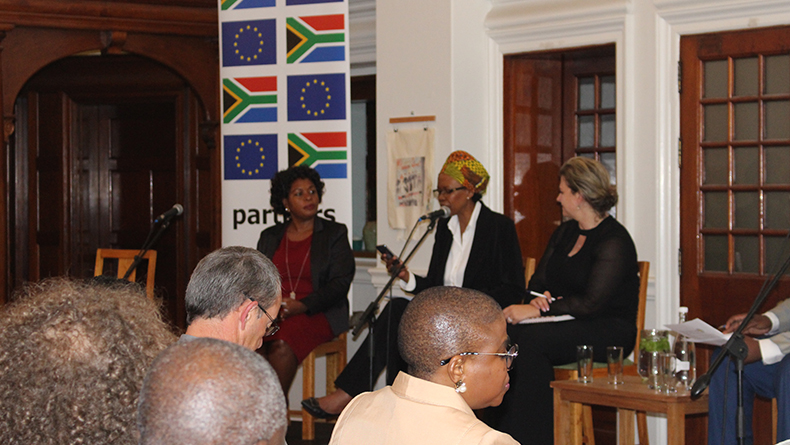 A parallel audit on IFFs involving various African countries will be undertaken in partnership with AFROSAI. That is why over 50 representatives from 13 African Supreme Audit Institutions (SAIs) met in Nairobi from 27 February to 3 March 2017 to agree on conducting a coordinated audit on IFFs in their respective countries. The meeting was hosted by the Office of the Auditor-General of Kenya as Chair of AFROSAI’s Knowledge Sharing Committee and supported by the GFG in Africa programme. This coordinated audit is unique in Africa given the high number of participants from all over the continent. It will start in April 2017 and result in a regional synthesis report summarising the findings of the parallel national audits that are planned to be published in the first quarter of 2018. Read the full article here.