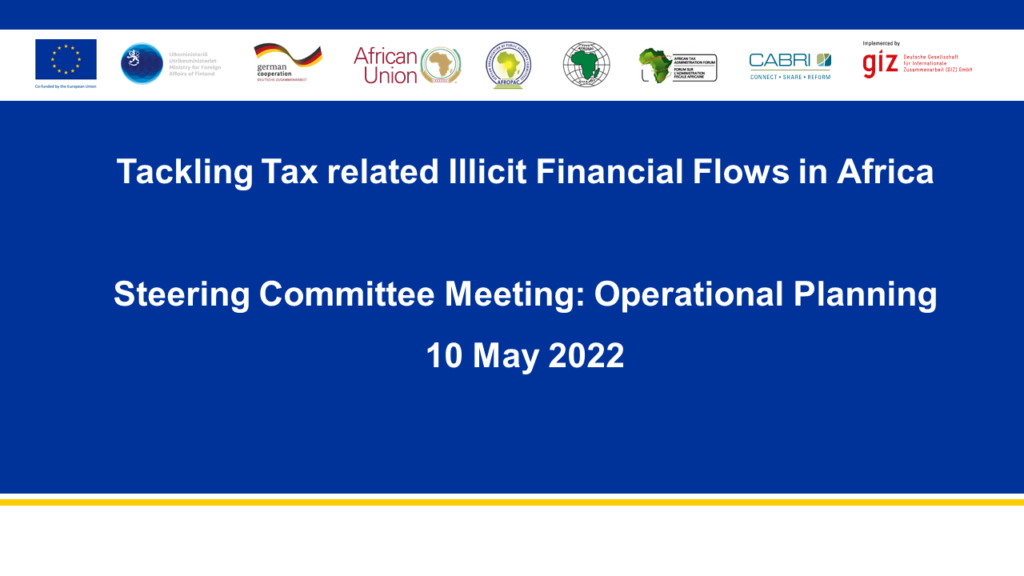 July 24, 2020 - In Illicit Financial Flows By otsile Comment off

The 2nd steering committee meeting of the the Multi-Donor Action (MDA) on tackling Illicit Financial Flows in Africa was held in Addis Ababa, Ethiopia on 10 May 2022. The MDA funded by the European Union (EU), the Ministry for Foreign Affairs of Finland, Department for Development Policy and the German Federal Ministry for Economic Cooperation and Development (BMZ).

The purpose of the meeting was to identify the successes arising from the implementation of the project, and to look to the future by agreeing on the activities to be carried out by the various actors involved in the sphere of the fight against illicit financial flows in Africa. Dr. Thomas Helfen, Head of Division, Coordination of operations with Africa, German Federal Ministry for Economic Cooperation and Development, highlighted that “Germany, Sweden, the Netherlands, France and Finland, have set up a regional Team Europe Initiative (TEI) to support Africa in combating IFFs and Transnational organized crime (TOC), based on a holistic and coordinated approach. Germany is lead coordinator. The TEI builds on existing initiatives to address IFFs and TOC, particularly in conflict-affected and fragile contexts.”

Notably, the Ministry for Foreign Affairs of Finland joined the MDA in December 2021, thus contributing to the augmentation of this MDA focusing on tax-related IFFs tied to their Taxation for development – Finland’s Action Programme 2020–2023. The Joint Action to fight IFFs in Africa is co-financed by the EU with € 5 million, the Ministry for Foreign Affairs of Finland (€3.4 million), and BMZ with a € 2 million contribution as part of the Team Europe Initiative. Thus, a total of €10.4 million has been mobilised to fight Illicit Financial Flows (IFFs) in Africa. In recognising this partnership, Mr. Thomas Huyghebert, on behalf of EU Ambassador to the African Union EU Ambassador to the African Union stated that: “This AU-EU Joint Action is of strategic importance for our Africa-EU Partnership and aligns with the commitment made to fight IFFs in Africa during the EU-Africa Summit held in Abidjan in 2017 and remains one of the key political priorities for Africa’s sustainable and inclusive development. We welcome the AUC’s initiative in taking the political leadership on developing crucial strategies on IFF’s and Taxation at continental level”.

The African Union Commission-Department for Economic Development, Trade, Tourism, Industry, Minerals (AUC-ETTIM) has developed a joint operational plan for 2022 to build the capabilities of the AUC to tackle IFFs in Africa. The 2022 operational plan outlines key activities and targets that are implemented by the MDA stakeholders and networks of African government officials in the areas of taxation, budgeting and fiscal oversight that support strengthening public financial management capacities across Africa. Mr. Djamel Ghrib, the Director of Economic Development, Integration, and Trade, delivered the speech on behalf of H.E Ambassador, Albert Muchanga, Commissioner ETTIM eluded that: “The Multi-Donor Action to curb IFFs is an important initiative & play a crucial role in supporting & closing the gaps in Africa’s financing needs for recovery, inclusive growth, sustainable development & building resilient economies”.

The 2022 work programme discussed during the Steering Committee outlined key activities and targets that are implemented by GIZ and key PANAFRICAN networks such as: African Tax Administration Forum (ATAF); Collaborative Africa Budget Reform Initiative (CABRI); African Organisation of Public Accounts Committees (AFROPAC); and the African Organisation of Supreme Audit Institutions (AFROSAI) and Tax Justice Network Africa. To implement the 2022 operational plan, The Steering Committee will outline the progress and roadmap on tackling Illicit Financial Flows in Africa, this included the IFFs country profile pilot research to identify IFF risks within a country.

Next Germany Provides Funds to IMF For Technical and Capacity Development in Africa.

The latest  news, articles, and resources, sent straight to your inbox every month.

Copyrights © 2022 All Rights Reserved by GIZ

Manage Cookie Consent
To provide the best experiences, we use technologies like cookies to store and/or access device information. Consenting to these technologies will allow us to process data such as browsing behavior or unique IDs on this site. Not consenting or withdrawing consent, may adversely affect certain features and functions.
Manage options Manage services Manage vendors Read more about these purposes
View preferences
{title} {title} {title}